I feel like I’m exiting a war zone. Ben took the bar for the second time this week. We shall see what results hold in April…

On the Personhood front, there was a rally in OKC at the capital that I wish I could’ve attended. State Senator Judy McIntyre did something awesome which you can read about here in an article from Jezebel. To sum it up in their words:

District 11 State Senator Judy Eason McIntyre had some choice words for men attempting to legislate the very deep insides of women’s bodies by carrying a sign that read “If I Wanted the Government in my Womb, I’d Fuck a Senator.”

I’m not sure if it’s the all-caps, the festive, hand-drawn lettering, or the giant grin on the Eason McIntyre’s face, but I do believe that this is the perfect sign for the would-be-hilarious-if-it-wasn’t-terrifying occasion.

Another gem from that particular article is as follows:

Also present at the rally was Democratic State Senator Constance Johnson, the woman who gained fame and girlcrushes when she attempted to attach a provision to the Personhood law that would bar men from ejaculating in any place other than inside a woman’s vagina.

Another awesome article can be found in The Huffington Post.

Well, tonight is First Friday in downtown Enid. It’s the annual Scotch & Cigars event tonight, which was one of Ben’s favorite moments of all time last year as he sampled some very spendy scotch (don’t worry, the Nora will be with my mom :)). After that, we’ll adventure over to the theater’s Cabaret night, along with maybe a couple of other stops along the way. It should be a fun night!

I’m a little brain dead, but here are some fun pics of my Nora.

She had zero qualms about the slide.

Helping daddy on the sailboat!

She loves her chair. 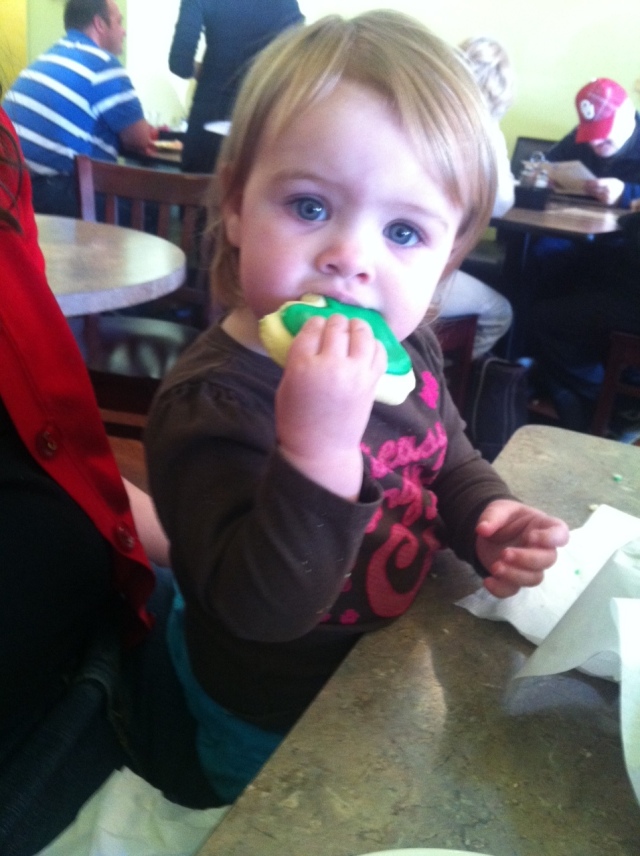 It was a definite success!

Nora and Papaw chilling at the office!

My two most favorites.

Lastly, Nora’s picture won a contest on instagram, and the prize was these adorable slippers! They came in the mail today and we are smitten kittens!