Well, I’ve had every intention of blogging being a daily habit, but the sweet Nora and I have been down with a nasty tummy bug.

Ben graduated from law school on Saturday (hallelujah!!!). I’ve started and stopped writing about that wonderful culmination of so much hard work and sacrifice on his part countless times, but I don’t think my brain has fully returned from the sick haze, so I think that will wait for another day.

As for Nora’s thoughts on the matter, we kept telling her how exciting it was going to be to have her daddy home all the time, and she threw up all over me and the in-laws’ couch during Ben’s graduation shindig, so interpret that as you will… For those of you who are as addicted to 30 Rock as my darling husband and I, you’ll know she is excited 😉

My brother comes home today. We’ve missed him, starting well before he was gone. He’ll see his little girl again and meet his niece for the first time. My beautiful niece, Alexis, who just turned 5, is so much like him, yet so different. She’s always the center of attention wherever she goes- she makes sure of it! 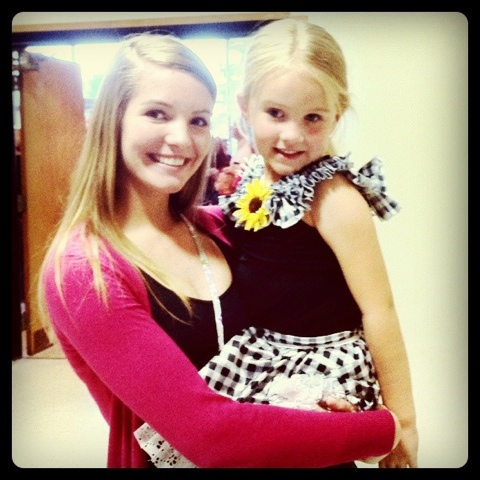 Here she is Saturday with my sister after her dance recital, which was unfortunately the same day as Ben’s graduation, so we missed. All reports say she was a vibrant performer, and apparently, her performance continued while watching the older girls. She was pretty sure she could out dance any of them!

I love her self-confidence. One day, we were at the park and she spied some other kids, all older, she wanted to play with. She simply walked over and told them what they were going to play. She’s frequently been known to yell out, “Hey kid! Watch me!” often followed by “Hey kid! I did it!” She is a songwriter, authoress of such hits as “Ooo, Baby You Love Me,” (lyrics are the same, but the live performance ranks among the greats!) among other backseat favorites. She’s smart. She knows all 50 states and their capitals and is working on the presidents in order. She is artistic, but quite the perfectionist and often draws the same thing 5 times before it meets her standards. She’s realized the important distinction between “won’t” and “can’t” fairly recently, which makes everything that comes out of her mouth a touch more dramatic.

One of my favorite Alexis stories is from a couple years ago. She wanted to play inside while everyone else was out in the yard. After making her rounds and getting turned down by each of us, she finally got this look of epiphany, and rang the doorbell! I’m pretty sure someone let her in the house after we were done laughing at her cleverness!

She is so creative and brave, and we are and always will be so glad to be allowed to be a part of her life.